Please join us on Sunday August 9 from 2pm – 3pm for the Venie Prize presentation. You can watch the event live here on the day or after the event as it will be recorded:

ENTRIES HAVE NOW CLOSED FOR THE 2020 VENIE PRIZE

In partnership with Rabbit: a journal for nonfiction poetry we are thrilled to announce the launch of the 2020 Venie Holmgren Environmental Poetry Prize. All entries must be received by 11.59 pm EST, Monday July 20 2020.
The winner will be announced in an online presentation on Sunday August 9 2020.
The judges for the 2020 competition are Jeanine Leane and Michael Farrell.

1. Entrants must be citizens of Australia or New Zealand or have permanent resident status in Australia or New Zealand.
2. Poems must be unpublished (including online) and not under consideration by other publishers.
3. Poems that have won or are under consideration in other competitions are not eligible.
4. Poems must have an environmental theme.
5. All poems must be written in English. No images, videos or audio files.
6. The winning poems will be published on www.holmgren.com.au and www.rabbitpoetry.com
7. An entry fee of $10 will be charged and is payable via bank transfer, PayPal, cash or cheque. A receipt will be sent as confirmation once the money has been received.
8. The name of the poet must not appear on the manuscript (including the header, footer or file name ) since all poems will be considered anonymously.
9. Poems must be no more than 80 lines of text.
10. Multiple entries are permitted, though a $10 fee applies to each poem.
11. Please ensure you are satisfied with your poem before submitting. Poems that are resubmitted will incur a second fee.
12. The competition closes 11.59 pm EST, Monday July 20, 2020.
13. Selection will be made by the judges. The judges’ decision is final. No correspondence will be entered into. Jeanine Leane is a Wiradjuri writer, poet and academic from southwest New South Wales. She has published widely in the area of Aboriginal literature, writing otherness and creative non-fiction.

She was the recipient of the University of Canberra Aboriginal and Torres Strait Islander Poetry Prize, and she has won the Oodgeroo Noonucal Prize for Poetry twice (2017 & 2019).

Jeanine teaches Creative Writing and Aboriginal Literature at the University of Melbourne and is currently editing a collection of First Nations Australian poetry commissioned by Red Room Poetry and Magabala Books to be released in 2020. Originally from Bombala, NSW, Michael Farrell has lived in Melbourne since 1990. His new poetry book is Family Trees, the follow-up to the Queensland Literary Award-winning I Love Poetry (both with Giramondo). He has also won the Peter Porter Poetry Prize. Other book projects include the anthology Ashbery Mode (TinFish), an Australian tribute to American poet John Ashbery, and the scholarly work, Writing Australian Unsettlement: Modes of Poetic Invention 1796-1945 (Palgrave Macmillan). Michael also edits Flash Cove. He co-won the Venie Holmgren Poetry Prize in 2017, and was runner up in 2018.

In her late 50’s Venie Holmgren began to write poetry and her first published anthology, The Sun Collection for the Planet in 1989, became a poetry ‘best seller’. At the same time, she applied her environmental activist skills and commitment to the campaign to save native forests near her home on the far south coast of NSW, where she was arrested twice for obstructing log trucks. After 16 years of solo self-reliant living she moved to the local town of Pambula where she penned her travel memoir, several more books of poetry and travelled widely as a performance poet. In 2010 Venie moved to Hepburn where she wrote her last poetry collection, The Tea-house Poems. In January 2016, Venie ‘caught the bus’ at the age of 93 . 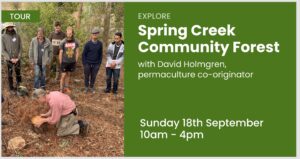 You are warmly invited to join David Holmgren in a tour beyond the boundaries down the gully to Spring Creek, exploring the territory where he, Su Dennett and others in the community have for decades been stewarding the common land on a larger scale, making tracks, planting and pruning trees, grazing goats, building leaky weirs and engaging in other positive action that enhances ecological diversity, makes the land more fire safe and amenable to locals and visitors alike. 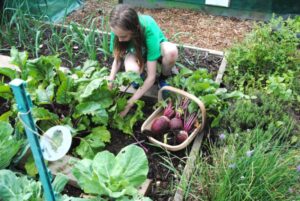 The Papillon Project continues to thrive

The Papillon Project is an educational charity that promotes sustainable living and environmental awareness to young people in the UK. They work with secondary schools to inspire young people to grow food for themselves and their local communities. David Holmgren is thrilled to continue being one of The Papillon Project’s patrons. Jim Gale is a man with a vision. Through his organisation Food Forest Abundance, he is working towards turning “50% of the lawns around the world into Food Forests. “We can solve ALL of the world’s major problems,” he says. Please join us for the 2022 Venie Holmgren Environmental Poetry Prize award ceremony where the winning poem will be announced and read out. This event coincides with the closing of the 2022 Daylesford Words in Winter festival. Share a drink, a poem, a yarn and relax by the fire. ... You are warmly invited to join David Holmgren on a tour beyond the boundaries down the gully to Spring Creek, exploring the territory where he, Su Dennett and others in the community have for decades been stewarding the common land on a larger scale, making tracks, planting and pruning trees, grazing goats, building leaky weirs and engaging in other positive action that enhances ecological diversity, makes the land more fire safe and amenable to locals and visitors alike. ...