You are here: Home › Vale Venie Holmgren
By Maureen on February 11, 2016 in News

Poet’s Corner, at Melliodora, was Venie’s home since she relocated from Pambula in 2012. On Tuesday many of her family and friends came together to celebrate her full life as a mother, grandmother, poet, activist, hippy traveller, avid scrabble player, friend and much loved community elder. 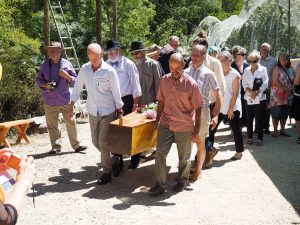 Venie was laid to rest at the Franklinford cemetery in a hand-crafted coffin made by son David, grandson Oliver and friend Stephen Oram in Stephen’s workshop. You can read more about the making of the coffin and the significance of the materials used, here.

A number of family and friends eulogised Venie’s 93 year long life with poems, memories, anecdotes, tears and laughter. Among those who spoke were fellow poet Peter O’Mara whose beautiful eulogy can be read here.

Venie’s son David addressed the crowd with stories from his mother’s youth, and how her decisions and life view helped shaped his own. You can read some of David’s eulogy here.

Kevin Childs, in The Local magazine, wrote a beautiful tribute to Venie and a great account of her funeral. You can find it here.

After laying Venie to rest in Franklinford, her family and friends returned to her home to enjoy a feast of local produce, as well as the small extravagances that Venie loved to indulge in: prawns, salmon and oysters.

Thank you to everybody who came along to celebrate Venie’s long and colour-filled life. And thanks too, to friends from afar, who have filled our inbox with notes of condolences and wonderful memories of a woman whose spirit and tenacity will always be remembered. Atop the handcrafted coffin Su, in one of Venie’s dresses David speaks about his mother Lowering the coffin in Franklinford