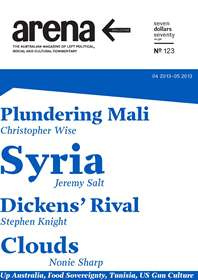 ———
Andy Scerri’s critique of Patrick Jones’ articulation of self-reliance, localism, and gift economies (Arena #115) is a familiar argument that has been used over the last thirty years to dismiss permaculture and related environmental activism by more traditional political activists.
The harsh reality is that neither pathway has significantly impeded the headlong rush of industrial modernity towards the ‘limits to growth’ cliff so accurately modelled 40 years ago by Meadows et al. I am more than ready to acknowledge that ‘our’ collective efforts at positive environmentalism during and since the 1970s have so far failed to catalyse the necessary changes in society, but Andy Scerri’s assertion that composting your private garden counts for nothing, reflects an ignorance of several structural and systemic factors driving and constraining social change.
First, if the changes or innovations required do not confer some advantage to the innovators and early adopters then there is little incentive for others to follow their lead.
Second, unless the necessary changes or innovations can be independently adopted by individuals, households and local communities without the resources, support and approval from central authority, then it can always be blocked by established interests that stand to lose by its widespread adoption.
Third, it is extremely difficult, if not impossible, for higher order organisations and governments to mandate a reality that doesn’t already exist as working models. Progressive and integrated adoption and refinement of the myriad of strategies and techniques associated with permaculture, enacted at the household and local level, addresses all three systemic issues.
——–
(You can read the full text in the current issue of the magazine)

2 Responses to The household level counts