You are here: Home › Video

Earlier this year, permaculture activists from Australia and New Zealand converged to a tiny town in Tasmania for the 12th get together. There, as one of the key note speakers, and a co-founder of the concept nearly four decades ago in Tasmania, David Holmgren delivered this speech. We posted the text of the speech earlier and now you can watch him on the video (thanks to Adam Hogg for creating and Eric Smith for posting it).

There are other videos from the APC12 on the official website including Stuart Hill (emeritus professor and foundation chair of Social Ecology at University of Western Sydney) discussing permaculture’s achievements and challenges.

The explosion of docos about sustainability in recent years includes a fair number that focus on permaculture and I have been interviewed in quite a few. The request to preview Inhabit and offer comment was just one of my “responsibilities” as co-originator of the permaculture concept. In the end I got to view Inhabit with 200 other permaculture activists at the 12th Australasian permaculture convergence in Penguin, Tasmania in March 2015. There was a standing ovation after the viewing. Of course the art and beauty of this film will make

it attractive to audiences used to polished media productions, but it is the substance underlying the beauty and passion that attracts me. The film can’t convey enough about the ideas and projects presented, for me to personally endorse every element in it as representing the best of permaculture, but I can endorse Inhabit as one of the best permaculture docos of the last thirty years.

Here’s the official blurb for the film.

Humanity is more than ever threatened by its own actions; we hear a lot about the need to minimize footprints and to reduce our impact. But what if our footprints were beneficial? What if we could meet human needs while increasing the health and well-being of our planet? This is the premise behind permaculture: a design process based on the replication of patterns found in nature. Inhabit explores the many environmental issues facing us today and examines solutions that are being applied using the ecological design lens of permaculture. Focused mostly on the Northeastern and Midwestern regions of the United States, Inhabit provides an intimate look at permaculture peoples and practices ranging from rural, suburban, and urban landscapes.

INHABIT: A Permaculture Perspective made by Costa Boutsikaris and Emmett Brenna is now available.

My essay “Crash On Demand” was the primary influence in framing this year’s Great debate at the Sustainable Living Festival in Melbourne,  so we felt that I had to make time to be there (in the middle of our Rocklyn Ashram residential PDC  plus peak fruit and honey harvest).

With an audience of over 250 it was an opportunity to explain the logic of bottom up permaculture activism in response to the energy descent future and hear some of the other perspectives presented. The dichotomy of the unwieldy title, the dreaded C word and the “vote” gave me the gripes, but it was good fun and an opportunity to catch up with Nicole Foss after our joint public speaking tour last winter.

Here’s yours truly kicking off the debate.

For those people who want to see the whole debate (nearly 2hr long, but you should), here is the entire Great Debate (Nicole Foss, about 35 min mark. About 1.20 min mark begins the summing up, voting and Q and A).

Requests for David Holmgren to do interviews keep coming in following the publication of his latest essay “Crash on Demand”. He has done a couple so far, in an attempt to answer some of the questions raised by the fellow travellers. Click on the links below to listen to what he has to say.

With David Holmgren on his essay ‘Crash on Demand’ with Stefan Geyer (21st century permaculture) originally broadcast on Feb 2, 2014 on London’s Shoreditch radio.

In the follow up email exchanges, Alex Smith from Ecoshock Radio raised a further question which was not covered in his interview.

Is David saying that the system will crash anyway and by scaling up permaculture activities will fasten the inevitable, or is he really calling for non-violent efforts to crash the economic system,  to save the planet, or is not calling for that? To answer that, he has compiled what could be termed as a concise summary of “Crash on Demand”. You can download the text here. We recommend you to read the whole essay first, though.

Crash on Demand, a concise version

See also the following video filmed for Pip Australian permaculture magazine, “How you can change the world with permaculture”. It shows David presenting a more positive take on what is essentially the same message as “Crash On Demand”.

Spring Creek Community Forest is the name we give to an informal project by local residents managing a section of public land (part of the Hepburn Regional Park) along Spring Creek between the Hepburn Mineral Springs Reserve and Breakneck Gorge. For over 25 years we have been active in initiating working bees constructing walking paths, managing naturalised vegetation (so called ‘weeds’), planting trees and building gabions and leaky weirs to slow and manage flood waters along tributary gullies and the main creek. Observation, scientific research and  documenting ecological changes over the last 25 years, particularly in relation to willow ecology makes Spring Creek an important reference site in the debate over management of willows along streams in southern Australia. 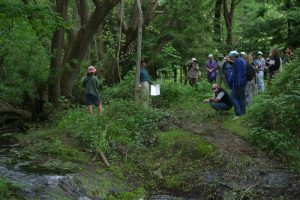 A tour down Spring Creek with David Holmgren

END_OF_DOCUMENT_TOKEN_TO_BE_REPLACED

This is the video message sent from David Holmgren for the launch of his Principles book in Portuguese, “Permacultura: príncípíos e camínhos além da sustentabílídade” published in Brasil. 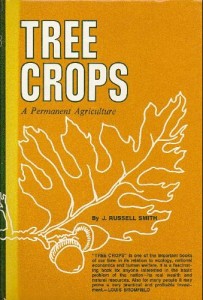 You may not have realised, but this 1929 classic book was a major influence on the development of the Permaculture concept in the 1970’s. It is a very hard to find a copy of this book, but  it is worth your effort. Or there are a number of websites from which you can download the entire book.

Brought to you from the MelliodoraHepburn ‘Tube channel. Last month a dozen students from Minamisoma city, from radiation ravaged Fukushima prefecture, visited the Hepburn district. They inspected Hepburn Wind’s locally owned wind farm before coming to tour Melliodora. We hope they have learned an alternative pathway to the nuclear powered life.

The story of their visit to Australia went to air through a Japan’s national TV network, TBS on April 9.

Letter of thanks from Fukushima visitors

Following you can see from the letter of thanks from the organisers of the visit, the kids had some inspirational time, away from radiation contamination. No doubt we will stay in touch with the project. David Holmgren was very much looking forward to attending CERES in Melbourne for the launch of the Permaculture: A Rhymer’s Manual album  (he loves the music, and loud), but, due to an accident he couldn’t be there.

So, he put his thoughts together about the album, to share in this abridged video clip. We assume it won’t be long before David is back on his feet and dancing to Charlie Mgee’s fabulous songs and music, that the permaculture principles have inspired.