You are here: Home › Permaculture Pocket Knives
By David Holmgren on October 2, 2013 in Ideas

Back in February 2012, at the Sustainable Living Festival in Melbourne, I was challenged by a colleague about wearing a pocket knife, which he pointed out was illegal (without a genuine reason). This was news to me and intensified my feelings of alienation as a country person visiting the centre of a large city. What was the world coming to? But it also stimulated thought about what my genuine reasons for carrying a pocket knife in public might be and how that question was intimately connected to permaculture.  In April 2012 I penned an essay, Permaculture Pocket Knives, to explore the issue but it sat unpublished until now.  I offer it here  as providing an insight into permaculture as a social sub-culture that stands in contrast to many of the dysfunctional normalities that characterise modern living in an affluent society. (Permaculture pocketknives) 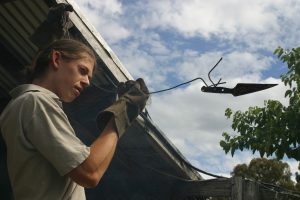 Weapons manufacture at Melliodora???
Oliver Holmgren testing a knife blade for straightness he had forged from an antique truck spring. Photo 2005, Oliver aged 19

Permakultur, read it in German
The Tea House Poems