You are here: Home › Permaculture now

He turned up one winter’s day in 1979 at our place in Arthur Street, West Hobart, and stayed for six months: Dave Holmgren, who, with Bill Mollison, had published Permaculture 1, A Perennial Agriculture for Human Settlements in 1978, to widespread acclaim. Dave had met Bill Mollison at a seminar in the Environmental Design Department at the College of Advanced Education. The seminar was entitled “How Patterns of Land Tenure Shape the Exploitation of Natural Resources,” which Dave thought was only mildly interesting. Bill at the time was a senior tutor in the Psychology Department of the University of Tasmania, but Dave describes him as: ‘…late forties I supposed, stocky, balding slightly, beard covering protruding chin. Meaty hands and thick nicotine stained fingers of a working man. His way of thinking and expression were fascinating: grounded but at same time, holistic. Ecological!’ Intense discussion followed the seminar, and from this chance meeting, the idea of permaculture developed.

The term ‘permaculture’ was coined by David, and originally referred to “permanent agriculture”, but was expanded to stand also for “permanent culture”, integrating social aspects in a sustainable system of production. The primary focus was the redesign of gardening, farming, animal husbandry and forestry through utilising the patterns and features observed in natural ecosystems.

Holmgren and Mollison were motivated by the rapidly growing use of industrial-agricultural methods in food production. Multi-nationals such as Monsanto lock farmers into methods which are highly dependent on non-renewable resources such as oil and its products, poisons that destroy land and water, reduce biodiversity remove billions of tons of topsoil from previously fertile landscapes, and directly and indirectly contribute to climate change. There had to be a better way, and why not look to nature for guidance?

Back then, five of us, Tony, Michael, Ian and Andrew and I, had scraped up a deposit on a house. It was an old, two-storey weatherboard rectory, on a north-facing quarter-acre block with large trees. We convinced the bank to lend us the cost of $40 000, although none of us had full time jobs and two were full time students. Our lawyer informed us of our purchase thus:

I bring the following matters to the House Meeting:

I am writing this last sentence to avoid ending the letter with a preposition.

Following our purchase, around a dozen groups of people set up similar houses in the West and North Hobart areas. Like us, these households sought to minimise costs and share household goods and furniture, as well as tasks and house maintenance. We were productively deviating from the nuclear family model of small families and high domestic consumption.

At Arthur Street we were beginners in gardening, so Dave’s arrival was very welcome. In no time, with Dave’s design and Tony’s hard labour, we had the garden organised into overflowing beds with small fruit, raspberries, gooseberries and strawberries, and fruit trees planted, plum, apricot and peach, and a range of seasonal vegetables. We shared the gardening, and made grand forays with truck and trailer up to the midlands to get sheep and horse manure, and old straw for mulch. We composted everything and even considered recycling human waste.

We found we could use a greenhouse, so Dave and Tony decided to set up its building as an Adult Education course: build your own greenhouse. The fee went to the purchase of materials: the insulation was cork, and came from a demolished coolstore in the Huon, the frame was celery top pine and heating was modulated by old oil heaters, filled with water. The cement foundations were laid beforehand, with low, second hand brick walls. On the weekend of the course, we all took charge of a series of tasks laid out in the garden. About a dozen participants turned up, and a great weekend ensued, resulting in a very fine greenhouse, facing east across the garden, where we propagated seeds and grew plants. We built a superb chook house attached to it, with four chooks resident. 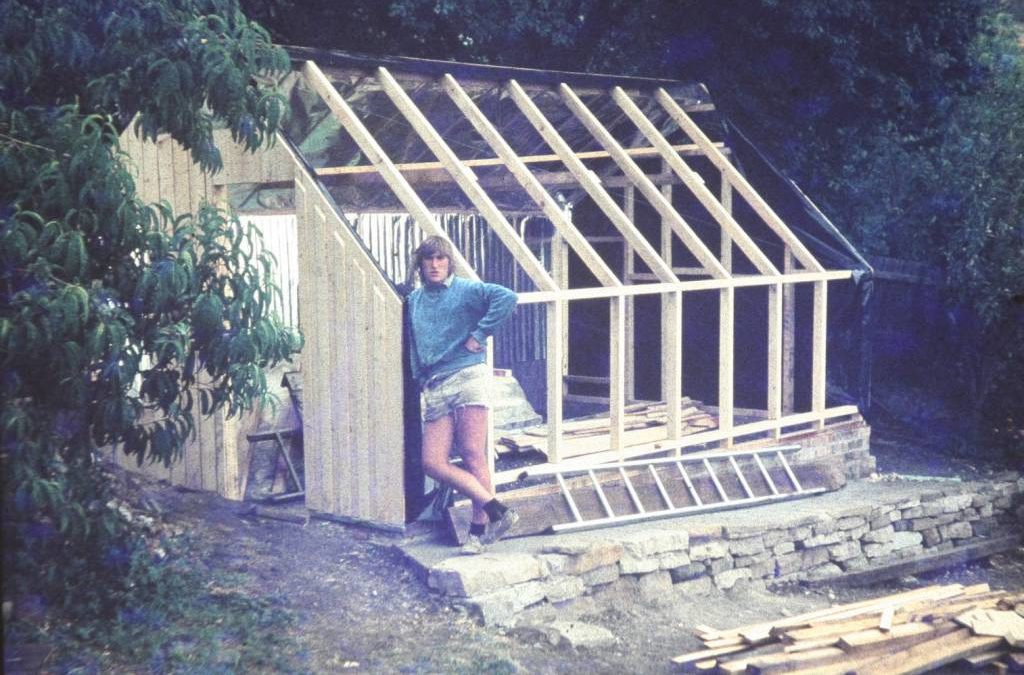 After six months, Dave went north to caretake a cottage on land at Jacky’s Marsh, on the slopes of Quamby Bluff. Again, he established a great garden in this small community and we visited from time to time. After about a year there, he was once more on the move, and we followed him. Tony and I, and our toddler son Gareth, and another family, Libby and Martin and their daughter Wren, arrived to help him build his mother’s house on land at Wyndham, southern New South Wales.

It was the spring-summer of 1980-81. We camped in the bush for three months, living in a large tent almost entirely taken up by a double bed. I loved it, the birdlife was amazing, with the dawn chorus starting before dawn always in sequence: you could imagine the birds singing across Australia east to west as the sun rose. We now know that songbirds originated in Australia, so we shared a beautiful and timeless event. The house was made of mud bricks which we made, and it was totally sustainable and off the grid, with a garden landscaped according to permaculture principles. Dave’s mother Venie lived there for many years, downsizing to Pambula and then moving in 2012 to David and his partner Su’s place in Hepburn Springs, Victoria.

Permaculture now has many branches that include, but are not limited to, ecological design, ecological engineering, environmental design and construction in sustainable landscape planning, and architecture. It includes integrated water resource management, and regenerative and self-maintained habitat and agricultural systems modelled on natural ecosystems.

Bill Mollison was a first-class disseminator of Permaculture worldwide, once addressing the United Nations General Assembly while wearing his gardening trousers. David, with Su, has spent the past decades refining and developing the principles and practices of Permaculture at their small-holding Melliodora, at Hepburn Springs, supporting Permaculture ventures all over Australia, and writing and lecturing.

In Europe, The Council of Europe works to connect European practitioners, organising a biannual convergence and sharing information on permaculture education. The permaculture movement has also spread throughout Asia and Latin America, that is Argentine, Chile, and particularly Brazil; with the Hong Kong-based Asian Institute of Sustainable Architecture (AISA), Rony Lec leading the foundation of the Mesoamerican Permaculture Institute (IMAP) in Guatemala and Juan Rojas co-founding the Permaculture Institute of El Salvador.

Permaculture principles and practices are just as apposite today, as for our group of friends back in 1979. Even more so as household sharing across the generations is becoming a common necessity. Young people, that is our children and grand-children, are finding it impossible to afford land or housing for themselves due to the investment housing bubble; on-going paid work has given way to insecure casual and contract work; wages are not rising, but the costs of energy have sky-rocketed, as has the overall cost of living, often leading to a monstrous burden of credit card debt. Shared family housing is an option and needs to be encouraged by government at all levels through the removal of restrictive living and building regulations to ensure accommodation and a decent standard of living for families.

In his most recent book Retrosuburbia, David promotes the idea that Australian suburbs can be transformed to become productive and resilient, by focusing on what individuals can do at the household level. Councils could do more to support this movement. The Hobart City Council for more than twenty years has greened its suburbs with parks and street tree planting, reducing the heat generated by the built environment, and mitigating the demand for power-generated air conditioning. Pleasant streets and parks encourage people to enjoy outdoor living and getting to know the neighbours, and support networks of activities in communities.

As David says, Permaculture as a grass-roots movement may be Australia’s most significant export for humanity facing a world of limits, and that includes the challenges inherent in climate change, faced by our own communities. Its insights, and principles should be more widely recognised, celebrated and put into effect, and the best place for this to happen is in Tasmania, where it originated.

Dr Carol Patterson is an Honorary Research Associate of the School of Geography and Environmental Studies, University of Tasmania. She has conducted social research in education, health and aged care with the University of Tasmania and with local and interstate agencies. An established writer, her book of short stories State of the Heart and other stories will be published in early 2019.