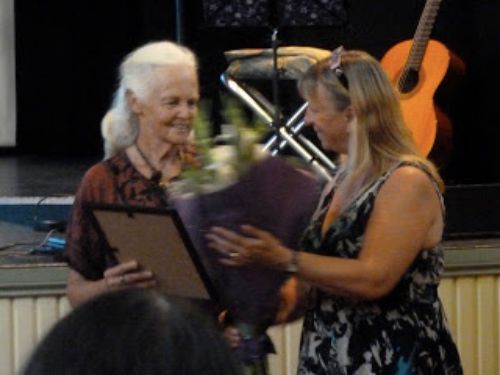 Su Dennett, David Holmgren’s partner in permaculture development and the backbone of the HD, was inducted to the Hepburn Shire’s Women’s Honour Roll.

Su was recognised as a role model for women choosing a home and community based lifestyle as an empowering and effective way to contribute to a better world. You can read her induction speech written and delivered by Dr Anne Gleeson on this year’s International Women’s Day ceremony. Onya Su, we are so privileged to be sharing life with you. Two women inducted to Hepburn Shire honour roll (the local Advocate newspaper article).

The Story of Su Dennett

One of the beautiful things about the two women being honoured today is that their stories are in so many ways stories of the recent decades of Hepburn Shire. These are stories in which many of you perhaps feature, stories where the activism of the women is part of our story as a community. In 2010 Su took part in the community photographic exhibition where community members were photographed in their sacred space and reflected on what this meant to them. In that exhibition Su was pictured working at her stove, surrounded by the food she had cooked, the pots and the wok. It is a captivating image:

I love to prepare and share food In so doing I feel the history of every ingredient that goes into a dish. The sun, the wind and the rain; the moon, the hail, the frost. The tilling of the soil by the farmer in preparation for planting. The tiny seed that germinates when planted. The nascent plants and their growth spurts after the rain. Flowering and maturing, the incredible warmth in the ripening. The very essence of life. Yours and mine to share.

I chose to begin this story of Su today with that photographic image and the  poetic images Su wrote because I feel they capture the essence of the passions which have driven her to undertake the activism that has lead to this award. At the heart of it is a woman who loves and respects the natural world and the creative acts associated with it and she wants to share the joy. This is at the heart of what Su does.

When Su’s Hepburn Shire story started she had had the advantage of growing up with a mother who had a strong connection with the land and its produce. As with many who lived through the war, Su’s Mum was a low consumer, making clothes and fixing clothes, preserving and creating basic wholesome food. This connection was reinforced by time she spent in Greece and Italy where village life was very much centred on the community involvement to do with harvest and production such as creating wine and pickles, pressing oil and making all sorts of products from the Mediterranean fruit and vegetables.

Su is a person who does not just talk the talk of sustainability or empowering our children or decrying the way our farmers are treated by the supermarkets. Su has shown us how to make a difference.  If we want growers treated differently we need to do something about it. Solutions might seems obvious like shopping in locally owned stores that sell locally grown vegetables or running a vege box scheme such as the Hepburn Community Scheme Su began in conjunction with Rod May as a producer. It may be obvious but it takes a lot of work and Su is the person who has done that work with the benefits going to growers and consumers here, but also elsewhere as this model has been adopted in other places.

It has been said that through Su’s efforts we now have a local version of the Mediterranean communities Su once lived in with the Hepburn Relocalisation Network.  HRN has to a large extent been driven by Su’s energy and vision. Projects that have been co-ordinated by Su include, but are not limited to, ”Workshops on seed saving, shoe making food preserving, wild food identification, seasonal solstice dinner celebrations followed by music and slideshows, local food surveys and fire prevention working bees and forums. Perhaps most enabling of all is her encouragement and modelling of community self-sufficiency so that buying in bulk is an obvious choice, or in the way having a few friends who share your values normalizes your own family’s experience.

One of Su’s most powerful tools in her kit for bringing about sustainable, community focused change is that she is person who is willing to have conversations with others. That may not sound like a world changing strategy but in fact it is a very effective way of bringing about change. Su is an action person and a doer, but by engaging in conversations about the things she does so naturally but so passionately she is able to steer behaviour. She is able to show people ways of living more sustainably in a more community orientated and interdependent way.

While it is easy to despair at the depletion of our resources and the unjust division of economic wealth Su is through her work, and her networking, showing us a way of building a more secure future by being a more integrated community.  This is a very reassuring and a much more viable position. Su leads by example and involvement and the sharing of her knowledge. With her life partner David Holmgren, Su is considered a pioneer of the permaculture movement. She runs the business, translates and publishes David’s writings, runs regular tours and courses. Together the home they have created at Melliodora in Hepburn Springs shows what can be done. They have transformed a blackberry infested couple of acres into a haven of productivity and delight for their family and friends and goats, and by sensible balance with their personal needs, a place of education and transformation.

Su is very much motivated by the world she envisages. She recognizes that negativity and anger can stop something, but it is through creativity that things are really achieved. She has become a big fan of the small steps. It is great that some people are extremely dedicated and can undertake very significant things but all of us are capable of doing lots of little things differently. If she wants the world in a particular way, then she needs to be part of the energy and creativity that will bring that world about. As Su sees it, each of us is drawn to particular areas where we can make a difference.

Su is saddened by the misplacement of excessive activity towards modern forms of communicative technology, alcohol, careless consumerism. She is particularly critical of the consumerist attitude because it increases the divide between the haves and have-nots. In contrast there is a reservoir of generosity underpinning what Su does. As one person said to me today, and I quote. With her talents, she could be growing a shitload of food and storing and preserving it for herself and her family, but she is utterly committed to community self sufficiency and a future for everyone, so she takes a completely different approach.

She is drawn particularly to a way of life that is supportive of young people being at home in the natural world and to that end, has provided a lifestyle and home from which her family and other young people can benefit. Rather than limiting their potential by a particular mindset of transport, money, technology, she argues that we need to be more expansive in the way we think about and provide for them, affirming the values of the things the country offers and recognizing what a country life can offer them, drawing attention to the detail of a blade of grass rather than a television programme.  She sees that to not provide children with the experience of, and skills to have, a relationship with nature is a serious deprivation.

Su  encourages us to act in the area that is important to us. I find that a very empowering attitude. You argue Sue, that we can all make many small differences and as a community we make a big difference. I believe this is what you have done. You have acted out of your love of food and nature and the creative acts of production and preservation and out of a vision that is way bigger than yourself or the time of your lifetime. You remind us of how blessed we are to live in this privileged area of our planet, with its soil, and rainfall and community with the consequent levels of productivity and healthy lifestyle we can enjoy.

And you have done this is in a way that has led people to develop their skills to bond as a community, to join with you in seeing a greater vision and to make the commitment to be part of the daily practice that is bringing that vision to being a reality. You have done it gently but convincingly and you have done it with good humour.

At community gatherings, at your dinner table at working bees and wherever you gather with others, your distinctive laugh erupts in these groups, an expression of your joy and optimism and connection.

Su has been universally described by those who endorsed her nomination as a person of inspiration. Su has modelled for the women of our community, an ecologically sustainable self sufficient home-centered life. Su empowers women to feel positive about re-centering their lives around the domestic sphere and to build better lives for themselves, their families, our community and ultimately our planet. Su as a woman moving to her wiser years continues to be an outstanding role model.

Su, tonight we pay tribute to you as a local elder, primary producer, teacher, mother, mentor, friend, community advocate and activist. Through your community involvement and lived out commitment to sustainability, you have advanced the cause of so many, including those who will be born in the years to come. You are an outstanding role model and tonight we want to say well done and we thank you for who you are and who you have been for us in our community.

1 thought on “Su Dennett inducted to the Honour Roll”