Rabbit: a journal for nonfiction poetry

we are thrilled to announce the launch of the Georgina Woods is a poet and environmentalist living on Worimi and Awabakal land, in Mulloobinba/Newcastle.

She has a PhD in English literature from Newcastle University and works in environmental advocacy. Her poems and essays have appeared in journals and anthologies including Overland, Cordite and Plumwood Mountain and her first book of poetry, The Tide Will Take It is published by Puncher and Wattman.

Joel Davison is a Gadigal and Dunghutti poet, technologist and sustainable fashion entrepreneur.

In her late 50’s Venie Holmgren began to write poetry and her first published anthology, The Sun Collection for the Planet in 1989, became a poetry ‘best seller’. At the same time, she applied her environmental activist skills and commitment to the campaign to save native forests near her home on the far south coast of NSW, where she was arrested twice for obstructing log trucks.

After 16 years of solo self-reliant living she moved to the local town of Pambula where she penned her travel memoir, several more books of poetry and travelled widely as a performance poet.

In 2010 Venie moved to Hepburn where she wrote her last poetry collection, The Tea-house Poems. In January 2016, Venie ‘caught the bus’ at the age of 93 .

You can read more of Venie’s life here. 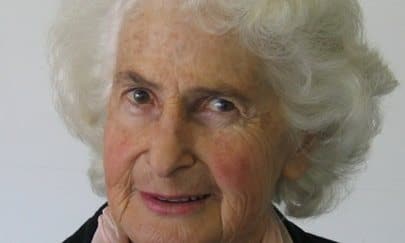 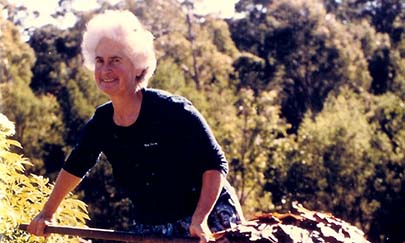 All entries must be received by 11.59 pm EST, Wednesday August 10, 2022. The winner will be announced at the Words in Winter festival in Daylesford on Sunday August 28 2022. The judges for the 2022 competition are Georgina Woods and Joel Davison.

Submissions for the 2022 Venie Prize have now closed. Thank you to all those who entered.

The winner will be announced at the 2022 Daylesford Words in Winter festival on Sunday August 28 at 4.30pm. Book your place here.

Please complete a separate form for each submission.

Just a reminder that your name MUST NOT appear on the document (including the header or footer) since all poems will be considered anonymously. Many thanks.