You are here: Home › Beyond the WAR on invasive species
By HD Office on August 11, 2015 in Ideas, Reviews 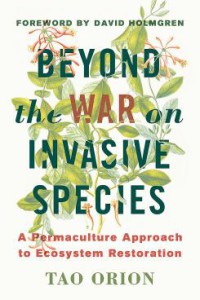 Beyond the WAR on invasive species: A Permaculture Approach to Ecosystem Restoration is a new book by Tao Orion published by Chelsea Green.

Beyond the WAR on Invasive Species offers a much-needed alternative perspective on invasive species and the best practices for their management based on a holistic, permaculture-inspired framework. Utilizing the latest research and thinking on the changing nature of ecological systems, Beyond the WAR on Invasive Species closely examines the factors that are largely missing from the common conceptions of invasive species, including how the colliding effects of climate change, habitat destruction, and changes in land use and management contribute to their proliferation.

The choices we make on a daily basis—the ways we procure food, shelter, water, medicine, and transportation—are the major drivers of contemporary changes in ecosystem structure and function; therefore, deep and long-lasting ecological restoration outcomes will come not just from eliminating invasive species, but through conscientious redesign of these production systems.

Here’s what David Holmgren reckons how this war began and now entrenches us, deep in the environmental conscience.

This new science of “Invasion ecology” informed the education of a cadre of natural resource management professionals, supported by taxpayer funds. These resources mobilised armies of volunteers in aʻwar on weedsʼ. But labour and even machine intensive methods of weed control were soon sidelined in favour of herbicides that environmentalists and ecologists accepted as a necessary evil in the vain hope of winning the war against an endless array of newly naturalizing species.
For the chemical corporations this new and rapidly expanding market began to rival the use of herbicides by farmers, with almost unlimited growth potential, so long as the taxpayer remained convinced that the war on weeds constituted looking after the environment. In Australia the visionary grassroots Landcare movement, started by farmers in the early 1980s, was reduced to being the vehicle for implementing this war on weeds.

Read in full, David Holmgren’s foreword to the book, here(PDF).